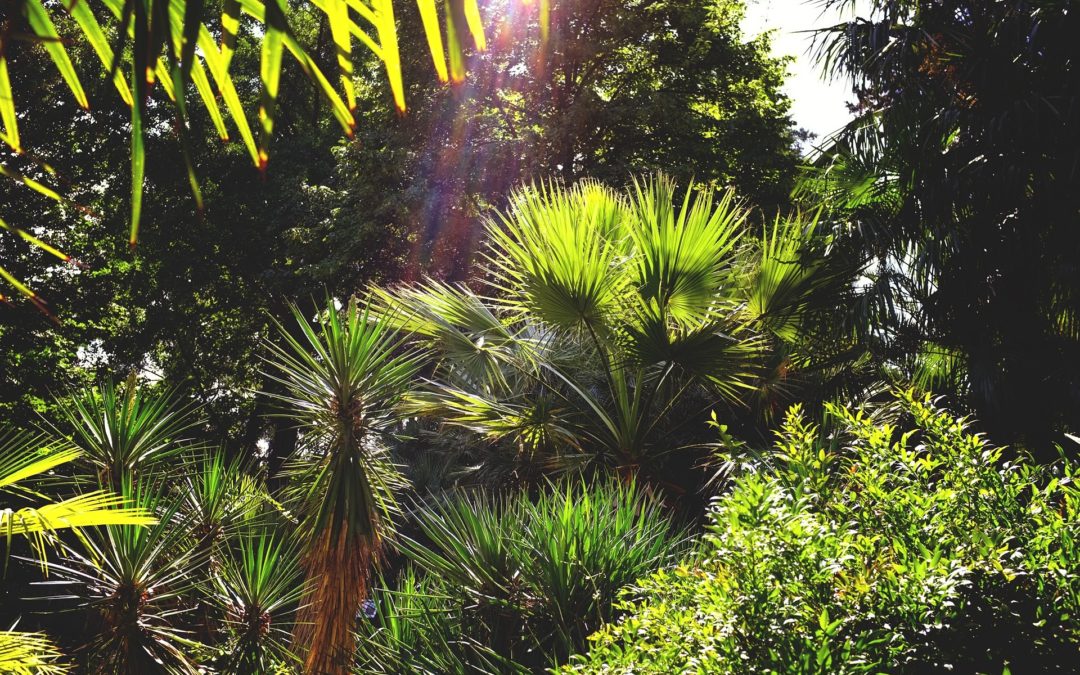 Some of the gardens have always been well known or even famous, others are more elusive, rather like a pearl in a treasure trove – if you have the curiosity and the time to go and seek them out, you will wonder at their spectacular beauty. Ligurian botanic gardens have the advantage of being situated in an area that has a mild year-round climate, bordered by the sea. Consequently they are able to sustain many tropical and sub-tropical plants that would not be able to survive in other parts of Italy or Europe.  The best season for flowers is certainly the Spring, but there are plenty of plants that can be enjoyed at any time of the year;  in a number of gardens there are also fountains, statues and interesting vintage relics that enhance the flora, making the sites all the more appealing. There are also many lovely gardens overlooking the sea offering fabulous views.

Hanbury Botanical Gardens  (Ventimiglia)
One of the most famous botanical gardens in the world is found in La Mortola. It was created by the British brothers Thomas and Daniel Hanbury, who bought the property from the Orengo family in 1867 .
The setting in itself  is a marvel in the way it clings to the coast, offering incredible views of the blue sea. The themed gardens add to the fantastic atmosphere:  the Japanese Garden, the Australian forest, the garden of Perfumes, the avenue of Cycas palms, the Agave and Aloe cactuses, not to mention roses, succulents, and the citrus and tropical fruit trees.

Pallanca Exotic Garden  (Bordighera)
The  Pallanca Exotic Garden is at the entrance of the town of Bordighera.  More than 3,200 different varieties of plants can be found there, including an important collection of cacti, one of the most valuable in Italy.
The lovely garden forms a steep rocky slope overlooking the sea, and an old mule trail marks the path that winds between the typical Ligurian terraces made of dry stone walls with exotic varieties that highlight the unmistakable landscape of the Ligurian coast.

Villa Ormond Garden (San Remo)
The splendor of the park surrounding the Villa Ormond in San Remo is the result of the inventiveness and enthusiasm of a wealthy Swiss tobacco merchant, Michel-Louis Ormond.
The park is divided into two sections and offers unique areas of great botanical interest such as the palmetum including more than seventy species of palms from every continent, the cedar forest, and the ficus and olive groves.
The Garden also houses an area dedicated to the Japanese Garden, in honor of the Japanese city of Atami, twinned with San Remo.

Villa Nobel Garden (San Remo)
The Garden of Villa Nobel in San Remo surrounds the villa where Alfred Nobel lived in serenity during the last years of his life until his death in 1896.
In this garden, which the great scientist called « My Nest », you can see lush palm trees covering an area of about 6099.10 square meters, accompanied by flowers,  a variety of shrubs and rare exotic plants.
The Villa and the park are now owned by the Province of Imperia, which has overseen their restoration and made it into a museum and conference center.

Villa Grock Garden (Imperia)
The Villa and the Garden were started in 1927 based on an idea of Adrien Wettach, better known as Grock, the famous clown. These two imaginative and stunning creations are found on the hills of Imperia Oneglia, and have a wonderful view overlooking the sea.
The park is home to many architectural oddities, arboretums and hydraulic installations that in their time were amazingly innovative.
All this inventiveness mirrors the madness and the magic of the circus which Grock masterfully recreated in his residence and the park that surrounds it.

Province of Savona
Villa Faraggiana Garden (Albissola Marina)
The Garden of Villa Faraggiana, which  surrounds a beautiful late Baroque palace, has all the grandeur and elegance of a large estate park of the time.
Avenues of trees and flowers are framed by ancient statues, delicate parterre gardens and large pergolas.

Eremo del Deserto Botanical Garden (Varazze)
Eremo del Deserto is a monastery of Carmelite Fathers dating from the seventeenth century.
The monastery is surrounded by a botanical trail about two and a half kilometers in length that winds in a loop. It makes a significant naturalistic impact with its remarkable collection of typical Mediterranean plants and shrubs belonging to mountainous forests.
There are also seven romitori interspersed in the dense vegetation; these are chapels where the monks spent periods of penance in strict isolation.

Province of Genoa
Parchi di Nervi (Genoa)
The Parchi di Nervi include the areas surrounding the Serra, Groppallo and Grimaldi villas,  and together they constitute the largest green area of the Ligurian capital.
Created in the nineteenth century as simple gardens, they have over time turned into a luxuriant urban park crossed by paths and enhanced by lawns.

The rose garden is among the loveliest in the world, with over four hundred varieties of antique roses.  There are also hundreds of botanical species of Mediterranean flora and majestic century-old shrubs.

Parco di Villa Durazzo Pallavicini-Pegli (Genoa)
A unique park in Genoa that combines nature, theater and architecture, designed in the first half of the nineteenth century by Michele Canzio, stage designer of the Teatro Carlo Felice.
There are many distinctive features to this botanical garden, such as the collection of camellias, the rose gazebos, the garden of Flora …. and dozens of other themed areas.
Inside the park you can also visit the Museo Archeologico Ligure.

Clelia Durazzo Grimaldi Botanical Garden (Genoa)
The Garden is located in the Genoese Pegli quarter near the Villa Durazzo Pallavicini.  It was created in 1794 on the initiative of Clelia Durazzo, wife of Giuseppe Grimaldi. She was a great enthusiast and student of botany, who gave a strong impetus to the scientific study of plants.
The Garden offers plant collections of immense value arranged into three sections:  succulents (cacti), carnivorous plants and tropical orchids.

Parco del Palazzo del Principe (Genoa)
The Palazzo del Principe is a grand and elegant house commissioned by Andrea Doria in the sixteenth century, and the monumental garden that surrounds it can be defined as one of the most important on the Italian Riviera.
Recently the entire park has been restored,  and in addition to the plants that are featured in it,  there are several important sculptures such as the statue of Neptune by the artist Taddeo Carlone.

La Cervara Abbazia di San Girolamo al Monte di Portofino (S.Margherita L.)
The garden itself originated as the hortus in the Benedictine Abbey of San Girolamo al Monte, a beautiful dwelling that overlooks the sea at Portofino.
Many botanical rarities are preserved there, the most important being a pepper tree more than a century old, and a purple wisteria that dates back several centuries.

Montano Pratorondanino Botanical Garden (Campo Ligure)
A Botanical Garden referred to as  « Museum of the Green »,  a newly created park that houses types of shrubs from three different habitats of mountain flora.
Many extremely rare plants are housed in this botanical garden, including some varieties in danger of extinction.

Villa Marigola (San Terenzo – Lerici)
The park of Villa Marigola was designed and built from 1926 on, and it follows the structure of a typical Italian Garden.  It encompasses various styles of different eras, from the eighteenth century up to the Romantic and Art Nouveau periods.  One of the main features of this site is its wonderful view over the Bay of Lerici. The Villa, over the course of centuries, hosted many famous personalities including the English poet Shelley.